With news of new development coming in almost daily in Cincinnati, the question remains--where do all the people go that were living in these areas of development? We've all heard the word gentrification, and despite the many different sugar-coated defintions that you may find floating around, it's true that the renewal and rebuilding of "deteriorated areas" does displace many, many people.

As cities like Cincinnati move forward with rehabbing old buildings, building new developments, and bringing in new businesses, they have to include affordable housing developments. There is value in creating a neighborhood that is accessible to both young professionals, the retired middle-class, and low-income people who occupied the neighborhood long before others began flocking in.

So how can this happen? How can investors and developers feel invested in the people of a neighborhood? I think that this happens with a cultural shift in thinking. If we can stop identifying people as "others" -- poor people, disabled people, people struggling with addiction -- and if we can start thinking about what each person can do for a community. 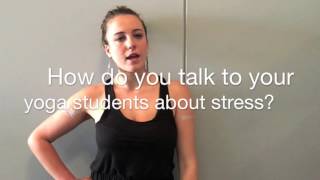 Managing Stress and Anxiety on Campus: A Diverse Range of Options

A Commitment to Community

A New Year, A New Challenge